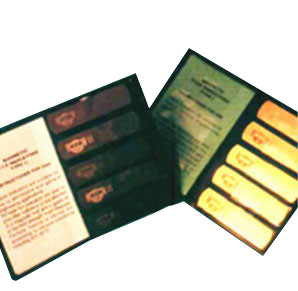 Surtest magnetic flux indicator strips are widely used to indicate the presence of induced magnetic fields during the magnetic particle inspection method for inspection of ferromagnetic materials. Flux Indicators give evidence of an external field in the air above the magnetised surface and in some circumstances can be used to obtain a semi-qualitative estimate of the tangential field strength H.

Type 1 indicators are typically used for general engineering applications and Type 11 are used for aerospace applications. Both types consist of three laminations measuring SOx 12 mm which are fixed together to form a sandwich structure wh ich is nominally 0.15 mm thick. The outer lamination has 3 interruptions which are parallel to the long side, The width of these interruptions and the material of the outer laminations means that Type 1 indicators respond to a weaker field than Type 11 strips . Both types are protected by a polymeric layer and can be differentiated by the Roman numeral next to the Ely logo.

Flux Indicators have the advantage of being flexible enough so that they can be bent to fit the contours of a workpiece, but robust enough to enable them to be used many t imes. They may also be cut into smaller pieces to allow them to be fixed in recesses and otherwise inaccessible locations on the workpiece.

We use cookies to personalize content and advertisements, to be able to offer functions for social media and to analyze access to our website. We also share information about your use of our website with our social media, advertising and analytics partners. Our partners may combine this information with other data that you have provided to them or that they have collected as part of your use of the services.

Our cookies have changed, so you will need to give your consent again.

Your previous consent to our cookies has expired, so you will need to consent again.

Marketing cookies help to recognize visitors to websites. This enables, among other things, to show them more accurate advertisements and search results.

Statistical cookies help to understand how visitors interact with the site by collecting and reporting information anonymously.

Cookies are small text files that are used by websites to make the user experience more efficient.According to the law, we can store cookies on your device if they are absolutely necessary for the operation of this site. We need your permission for all other types of cookies.This site uses different types of cookies. Some cookies are placed by third parties that appear on our pages.